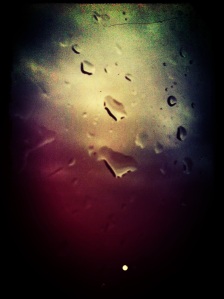 Thunder cracked as lightening split the sky wide open. Rain poured hard, mimicking tears of pain being shed, as a manipulated heart he so long abused and ripped wide open, lay bleeding in his wake.

A single spot of light shone bright through the darkness; signaling to the fallen, a beacon of final truth; his ugly truth and the realization that her intuition had, in fact, been right all along. She wasn’t crazy, she wasn’t imaging the things he vehemently denied and tried to convince her were normal fears; she was spot on each and every time, and that unnerved him, that she possessed this gift of a seer, which meant he had to be even more clever and cunning; at first proving to be a source of great excitement, but as time passed became more of a challenge that left him mentally and physically exhausted.

His torturous reign of which she had so long been an imprisoned victim, had finally come to an end; and while he still believed he’d walked away victorious, unscathed from the initial onslaught, being extremely contrite while pleading with empty promises of altering his behavior.

She knew it was only a matter of time, and his escapades would begin again, once the emotional storm had subsided; but karma would most assuredly ensue, and this was a knowing she believed and felt in depths of HER soul…