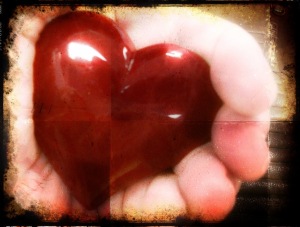 Fear is a silent killer that comes in many forms, recognizable at times, well disguised at others; it slowly chips away at us. Breaking off pieces, sometimes chunks at a time, from the inside out until there is nothing left.

She tried again and again to express her heartfelt apologies and sorrow for the things that had transpired, the words slung like daggers straight to the heart; acquiescing it was her own fear and unknowing that spewed forth, when all she really wanted was answers to lingering questions, reassurance that all was not lost and to feel connected once more. But it was all to no avail.

For he could no longer see the goodness, feel the warmth from the light that emanated from within her; no longer cared or believed her claims of love. For the vile hurtful words penetrated deep, cutting like knives and instead of pulling them out and attempting to heal the wounds, he preferred to leave them there to fester, become diseased, possibly be the death of him, as a reminder that she was just like all the rest.

He refused to see or entertain the idea that circumstances beyond anyone’s control could possibly have been factors in the emotional outbursts that ensued. No span of time or space offered healing of any sort, for she no longer took him to that happy place, where he felt good about himself inside and out; there were others who filled that role now, others with whom he could relate and play, who took him away from the pain, if only momentarily, if only in his mind; and so he simply aimed to cast her out and forget, dismiss and toss her aside, throw her and her demons away, as a piece of trash that’s quietly hauled away and forgotten.

Forget that she had bared her heart and soul, exposed pieces of self that filled her with shame and she never wanted to relive again; doing so at his urging and prompting, all in the name of healing; things she had never shared with another living soul. Things she buried deep and locked away, sought to take to her grave, things he now knew and she wished he didn’t. She trusted him with everything and now he viewed her as nothing.

And even though he’d done the same, questioning her over and over about things that were of no consequence or didn’t exist anywhere but in his own mind, she eagerly answered every question he ever asked of her, trying to dispel that fear and reassure him; but none of that now mattered or was even a factor, for there was no rebuilding of their world; a world he once convinced her was built on a foundation of absolute trust, truth and love, like none other he had ever known.

And so she goes on, seemingly breathing but gasping for every breath, walking silently, alive but mostly dead; believing in nothing and no one; knowing that truth is but a lie, trust does not exist and true love is but a mere fable sought by romantics and faerie tale poets; and a surefire weapon used by womanizing men who seek nothing more than validation from countless women to remind them they’re alive.

A travesty she will carry through this life and all others…