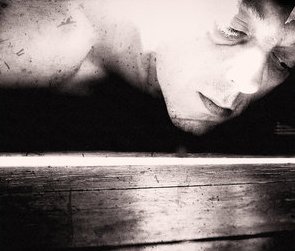 With old patterns faltering in the wake of time, serving him less and less; desperation creeps, then slowly sets in.

Searching for something real to cling to; in a world of illusion and cheap parlor tricks; of which he created and has always dwelled.

Better to be an imaginary somebody, than a real no body; his platform, his soapbox, his mission, his salvation.

Spewing his gospel as weightless as smoke rings, growing bored with his half dozen converts; unable to stroke his monstrous ego; he sees only one place left to go.

One soul he touched. Upon a time was touched by. He refuses to release and let go. Disguised as forgiveness, he sets about his mission; back to the only arms left, that wait wide open.

Naïve and weak, yet privy to his ways; a masochist for certain, to take him back in. She is not the reason, but merely a convenience. Providing him shelter, buying him time; bringing him closer to where he believes salvation resides.

The beautiful butterfly, with delicate wings; once so fragile, easily ravaged; consumes his thoughts, still rules his darkness; and so true to predator form, of which he will always be, he sets about stalking, making connections; broadcasting his relation, as if guaranteeing him a position. Wasting time, sniffing and searching; for the butterfly has morphed, long ago taken flight.

And so time ticks on, for this wasted life; over educated and under achieved. When he could have soared to the greatest of heights; been a true inspiration, perhaps a revered master. But the only expertise, he can lay claim in the end; is leaving a trail of pain, in the wake of his disaster.

4 thoughts on “Means to an end”